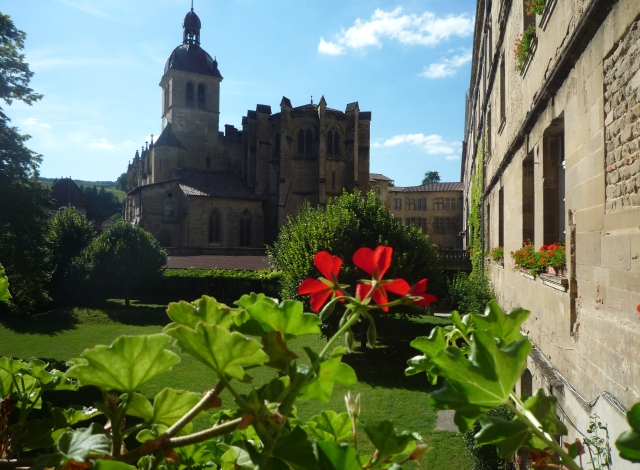 The Abbatiale–the Abbey church. Views that never become boring. Nor does the contrast of red geraniums with the verdant pre-alpine summer.
Three Gothics? Why not! Textura, Flemish Bâtarde, & Fraktur. Adjacent scripts with their associated flourishes and decoration styles, and modern adaptive possibilities. Let’s go!
Start with a basic “Textura”–the sort of Gothic script that produces a dense woven look on the page. “My text was once your textile” as Edward Johnston once wrote to the weaver, Ethel Mairet.

Verdun, Bibliothèque Municipal, MS 0107–voilà the close weave of the page. The even spacing. These are our goals. Keith demonstrates ways to make the letters closer, touching, overlapping exactly, to keep that regular texture…

Some classes are more camera-shy than others–at least we can see Joaquín Gracia–hard at work; Victoria Gerchinhoren–having a little consultation with me; Daniel Esteve Carbonell doing some stunning work–this is a class rich in extremely competent left-handers; Máire Mayne having a little consultation with Keith; Eduardo Teruel & Sonia Beroiz bringing cushions to give them more height at their écritoires; Christiane Soufflet–so precise, her feather touch; a balloon! If you hear a strange roaring noise at Saint-Antoine, & you think it may be a dragon, and you rush to your window, it may be a “montgolfier” instead! Marie Posner–another precise left-handed scribe. And a flourished “d”–or perhaps ∂–after the historical scribe, Nicolas Spierinc–somehow reminding me of the montgolfier…

Uncaught by the camera were Camille Gardette, Joseph Montalbano, Christine Nodet, and Jacinthe Tros–but I have not abandonned hope; I think there are more photos to be found!  Meanwhile, we save the large demonstration sheets from the front of the class to use as wallpaper later, they make nice abstractions.

Nearly everyone has a go at the “montgolfier” ∂ [d]–a few of them got put on the wall in front of the camera…Except for Daniel, I don’t have attributions. Mesdames & messieurs, would you care to identify your work?

Let’s have a look at…is it Eduardo’s desk? studying the Flemish Bâtarde…

& then at the right, Daniel working on his Fraktur project–because the third of the “Three Gothic Scripts” is Fraktur. Inundating his water-written letters with drops of spreading watercolour…
Let’s just have a look at the technique of two excellent and experienced left-handed calligraphers, Victoria & Daniel:

Keith loves doing brush lettering on textiles. The observers are really standing back…why? Are they afraid of being splashed? Finally, the camera caught Jacinthe (second from left), along with Victoria, Joaquín, Christian and Marie.

[Sorry, inserting a video seems to leave a mysterious empty space.] Nonetheless, no one was too afraid of being splashed to try it! I am afraid to try to attribute them, though–please post a comment and claim your work! Next time, I shall bring an iron/fer-à-repassage/plancha to the classroom. the wrinkles were barely noticeable in real life, but in photos they are too striking. Still, the lettering is very good, dear students!

As is his wont, Keith has cut reeds (and taught everyone how to do it) and then suggests an exercise in using reeds, exploiting the transparency of of the walnut ink/noguerina/nogalina/brou de noix, and producing an attractive composition with that notoriously uninformative text “a, b, c,…x, y, z”, all the while learning a bit more about spacing gothic scripts.

After trying the alphabet, some people went on to write out words and phrases–Camille wrote out her family’s names–for a beginner under twelve, we are quite proud of her.  “El siempre es un tiempo de hombre” Joaquin’s. Daniel and Eduardo have signed their alphabets—the other works? My copious notes are not copious enough. Please let me know which are whose! 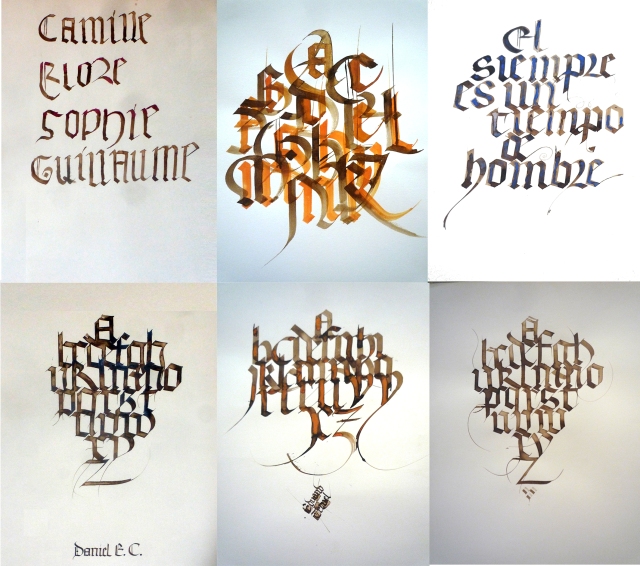 Are these perchance Victoria’s and Máire’s here below…? Tell me!

Lots of variety in the projects–but whose are which? Ah ha! “Amarillo se extiende…” is by Joaquín, signed with his nom-de-plume (ou de -guerre?), “Nauta”;  “Un dia el tiempo…” might be Victoria’s? (I know that “U/V” was destined for a lot of elaboration…), “Le petit Chaperon Rouge is unquestionably Joseph’s–he has dutifully signed it. Almost everyone did something with the “Sebastianis martiris” text from the Flemish manuscript. Whose are they? Eduardo? Sonia? & the other interpretation below it? I would attribute “Gritos Horror” to one of you–Eduardo, you are getting so good I cannot tell which is yours and which is Sonia’s these days. Daniel very creatively interpreted the Fraktur majuscules as an alphabetic composition–beautiful! “Stelt u zich een…” has me mystified. I should remember, it’s Flemish?
Please! Chers élèves: some comments to help!

So much for the “portrait” format works. What about the “landscape” layouts? Actually there are a lot of horizontal formatted works in the “textile” part of the exhibition. But here are a few that were realized on paper: I know the William Blake is Máire’s–she has developed a personal monogram/signature with two Ms that make a heart and enclose the date. Very nice. Qui es chez elle? I think I am guessing it is Marie? I love the slightly angular interpretation of the cadel initials. Who thinks “Doing the garden” is the best thing? Everyone writes so many languages…Vicky? Joaquín, Christiane? You might… Whose “Septembre” is this? Please, por favor, s’il vous plaît–send me a comment and let me know! Thank-you!
They are all, nonetheless, very satisfying to see after such a short course. Real work!

Eduardo, you get the last word–or the last image–smiling down from the Salle Blanche.