Here we are, back in the lush Lake District, carrying on with our plan to offer historical scripts in a cool, green location in high Summer.

Such lovely light in the classroom. Perfect for writing– unless you are easily distracted by the antics of sheep outside your window…

Keith conserves demonstration paper and makes interesting overall effects by flipping them up and writing in a different colour. Pretty. But the student must pay careful attention.

Here is one of those two-way demonstration sheets in both orientations–each with the “other” colour filtred out. This is the corsiva anglicana minuscule. Those encircled ks are actually ws!
A small but rich class, we are: Ralph Dennison, father of Tom, who is Keith’s godson & the guiding genius of Laya Point Permaculture, this idyllic locale for a calligraphic “retreat” in the delicious Duddon Valley…;
Liz Goyder from last year, back for a second course; Ralph’s genuinely lovely sister, Sandra Dennison, coming along for a taste of calligraphy; Susie Jones bringing her project already projected in draft form; Peter Stanley, putting out metaphorical fires & sometimes joined by his (equally genuinely) lovely wife Anne; and Miquel Centellas, another recidivist, back after last year’s success on the course & his own intervening success with his Design Degree in Barcelona…

below: part of a page from Tàrrega, Catalonia (left) and one of Miquel’s studies…

& after studying & copying the script, we must have a look at the decorated initials. There is plenty of variety in the decoration, but far too little in the letters to be seen: too many such documents begin with a very limited number of capital letters–they tend to start “We…” followed by a ruler’s name and territories. So looking at an “N” and using its inventory of decorative elements to fashion a different letter can be a useful skill:

–simple elements, recombined to decorate letters not found already elaborated in the documents: N, for example, with its shaft and bow re-organised to make an L–a G in the style of a T–a K made from parts of a P….

Here is Liz in her preferred, well-lit corner, back again this year despite her difficulties last year with her dear cat Annie who suffered a serious accident which really limited Liz’s participation in the course. This year, Annie was fine, & Liz undertook a more complex project which will (I think) lead to a whole series of works.

There seem to be few moments when everyone is in their seat at the same time. I.e., not in this photo. The ever-present availability of cups of tea can be distracting–or a much needed opportunity for perspective. 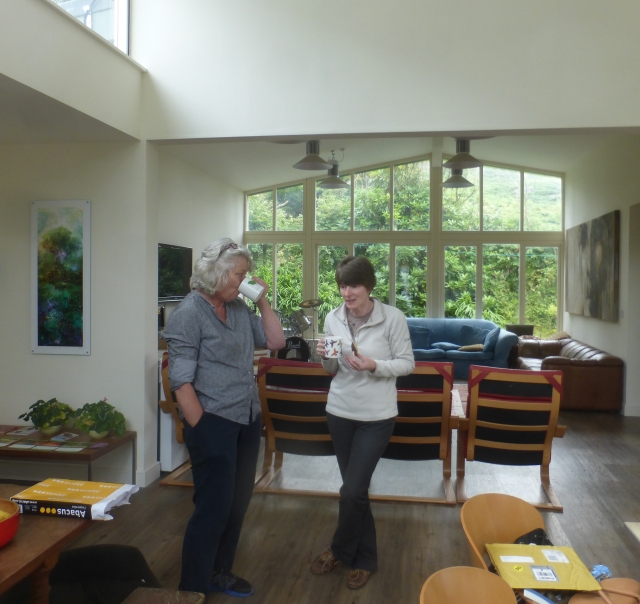 Cups of tea? Sandra and Susie, converse in more of the spectacular study space of Laya Point. Calligraphers need to stand up, move about, and drink tea! Also to discuss their design and layout questions, their ideas about colour, inks, pens…

above: Sandra and Susie at work. Sandra exploring BIG writing with a bassoon reed on a long roll of paper; Susie adding delicate decorative plant motifs to her project.

Pete is fascinated by Keith demonstrating the preparation of egg tempera with a very fresh egg from Laya Point’s own hens (a new addition since last year’s fabled duck-egg glair making).

The Dennison siblings–Ralph, the squire of Laya Point, and his sister Sandra–two left-handed Dennisons in the same generation. Lovely to see them together, and writing. Sad that Sandra couldn’t stay for the whole week. Next year, we hope.

above: Works in progress. Ralph’s trial versals, some sketches and drafts for Susie’s magum opus about her friend’s allotment, Miquel’s skillful studies of the notarial documents from the Archive of the County of Urgell (Els Privilegis de Tàrrega), a detail from Susie’s final project in progress, then; hard to see: Liz’s expertly ruled lines for her major work about quinces with the tree delicately pencilled in, Pete’s illuminated interlace initial with metallic “gold” paint. The scriptorium had some intense moments.
below: Pete and Miquel. Miquel, like Liz, was present at the first Laya Point calligraphy course in 2015. He returned, now with his Graphic Design degree from Bau (the University of Vic’s Design Department in Barcelona).
Pete and Miquel were lodged in the famously spacious cottage up the hill, which Miquel enjoyed sharing last year with an Englishwoman and a Scotswoman (see last year’s post)–this year he drew an Englishman. There they are, listening attentively to Keith’s presentations, arriving from the cottage on one of the damper mornings, & intently busy with their projects.

Pete didn’t hold out for the final exhibition–he had to rush off, so his is a one-man show. Susie, Ralph, Miquel & Liz managed to have work exhibited on the final day…

Ladies & gentlemen, I don’t have a good, reproducible image of any of these works alone except Ralph’s. I’m sure it would look better shown in company. If you can send me a reasonably focussed photo of yours, I’d be very happy to include a close-up gallery here.
Voilà! Susie has delivered a much better photo of her work (doesn’t show the large, elegant margins, though) so I can show it here next to Ralph’s ambitious project–ambitiously long for a genuine beginner & left-hander, with this interesting historical script.

I’ll leave you with Jeeka & Eric (her guest) relaxing indoors…Mia-the-pussycat declined to be photographed this summer–perhaps she was out monitoring the ducks & chickens.

Summer 2017: we are planning to offer two courses at Laya Point: one on Spanish and English Italic Scripts, and another on Catalan & English Modernist/Art nouveau Lettering.
Who will be coming along? You, o reader?